To most people AE86 sounds like it belongs on the periodic table, Twincam sounds like a type of Camera and Hachiroku sounds like some kind of terrible disease but mention any of these to a Japanese car fan and just watch their heart skip a beat as they think of the legendary little Toyota Corolla which single handedly started drifting, had its own tv series, competed in circuit racing and rallying across the globe and captured the hearts and dreams of a generation of petrol heads.

The Toyota Corolla itself has been with us for almost 50 years and has developed a reputation for being a dependable tool for mobilising the masses, reliable, safe, well built and economical but lets face it a bit boring – the car equivalent of a well trained labrador, a loyal faithful companion thats good with kids and wont bite your head off. This formula has been proven to work for Toyota as the Corolla has been the best selling car of all time so over the years they haven’t really messed with it – drive a Corolla today and it will fulfill exactly the same role as the first one that rolled off the production line in 1966, you will never find anything revolutionary but it will do exactly what it says on the tin.

However there was a small blip in the history of the Corolla when in the early 1980’s something strange happened… Toyota released its new Corolla GT Coupe (Levin or Trueno if you want to be JDM) in 1983, on the face of it this car was pretty unremarkable just another Corolla, albeit a slightly more “sporty” version. The styling was pretty conservative, available in 2 body shapes saloon or hatch, with either regular headlights(Levin) or the 1980’s special – popup headlights(Trueno). The drive train was a rear wheel drive setup with a live rear axle at a time when everyone else was switching to front wheel drive, the engine a humble 1.6 and the dash was your usual 1980’s Japanese standard of a series of boxes moulded together with 2 tone velour upholstery. 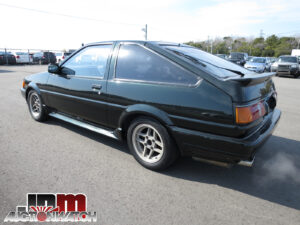 Toyota must have been happy, a nice safe inoffensive mildly sporty car which fitted in with the Corolla range perfectly. But they were wrong, somehow this car instantly became an icon, the Labrador that was the Corolla had accidentally been humped by a pitbull with a bad case of small dog syndrome and a legend was born. The car still had all of the labrador traits, it car was practical, reliable and economical – but people quickly realised that the pitbull had brought some attitude to the table. The drive train may have been a tried and tested RWD setup but it had a LSD (Limited Slip Diff) as standard on most models which meant that out of the box this car could drift, the engine while it may have been just a 1600cc was far from any other 1.6 of the time, the 4AG unit had 16 valves, double overhead cams and a variable intake system it put out 122bhp which doesn’t sound a lot by todays standards but this engine just lives to be thrashed and rev’s forever. But the best part of the AE86 as it became known due to its chassis code was the chassis itself, the AE86 weighed in at just 1000kg, with really positive front end grip, a loose backend coupled with that all important LSD and an eager revvy engine it was an instant hit. 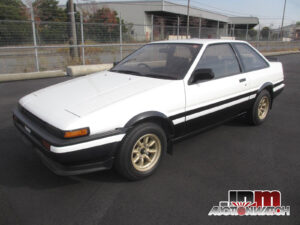 I have been lucky enough to drive lots of 86’s over the years from completely standard cars to 2.0turbo swaps. If you have never driven one then make sure to add that right onto the top of your bucket list in capital letters and underline it in red. Check one out today and you will notice how its wedge shape looks pretty dated, its not a sleek or timeless car but this is all part of the appeal, instead it screams 1980s retro goodness and is an instantly recognisable icon which when coupled with period wheels and some lowered suspension turns more heads than many supercars. Step inside and the first thing that will greet you is the smell, your car could have been owned by a Japanese chain smoker with digestive problems who survived on a diet of nothing but cabbage and chilli beans or have sat in storage for the last 30 years, It doesn’t matter, they all smell the same! Aside from the smell the interior is once again bursting with Japanese retroness, the seats often don’t stand the test of time too well and the original steering wheel is comically big but the driving position is spot on, the gear change sharp and you really do feel at one with the car. And that is important because the 86 is all about the way it drives, fire up the engine and you will fall in love with that distinctive 4AG note, I don’t care what anyone says this engine is one of the best sounding 4pots ever, particularly coupled with a 4branch manifold and uprated exhaust, you simply cannot get bored listening to its raspy note and I love the way TVIS system opens its butterfly valves at just over 5000rpm changing the note slightly just to let you know that you are doing things right as you push it all the way to the redline. 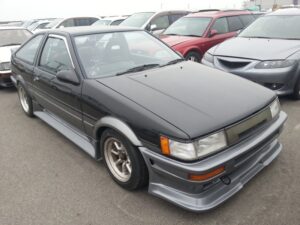 Whether grip or drift is your thing these cars are a blast to drive, and you will be amazed at how sharp they feel for a car that was first launched over 30 years ago, yes the steering feels a little vague compared to more modern performance cars and yes the brakes even though they are discs all round do show their age but this is all part of its charm and with no stupid electronics or ABS to spoil your fun the AE86 is a real old skool drivers car. The 4AG in standard form for all its revvy goodness feels a shade underpowered but this just encourages you to push it even more and keep the revs in its sweet spot with perfectly timed gearchanges. When you stack up the figures, there are a lot better ways to get more performance for your money, but nothing will give you the same fun factor as thrashing an AE86 to within an inch of its life. This is particularly true when you start to slide one of these, they have a reputation as donut specialist here in Ireland and despite what anyone says lighting up the back wheels and sliding around is not only a great way to learn about controlling a rear wheel drive but will more importantly put a massive grin on your face and if you too high an opinion of yourself to have some simple fun every now and then an AE86 is not the car for you! However donuts are just the first rung in the ladder of this cars potential, AE86’s are not an easy car to drift, come from any sort of high powered rwd car to one and you will struggle.. to get an AE86 to slide you have to keep the engine singing at all times and have the balls to just go for it, the work rate is high compared to cars which have the power to make things effortless but the buzz you get makes it all worthwhile. And when you’re done being a hooligan the car reverts to being just a Corolla by being economical, reliable and at a stretch practical.

My own AE86 story began when I first clapped eyes on one as a kid complete with superlite rims, janspeed exhaust and a CB aerial that Nasa would be proud of… I was hooked, and once I seen them in action at Rallys and cruises I was obsessed, for me no other car has so much of an attachment and I have owned 86’s for over 10 years now, and even though I have had my heart broken, my bank account emptied and my licence blackened by them but I would never want to be without one in my life, I even set up a website and owners club (AE86irl.com) for like minded addicts. 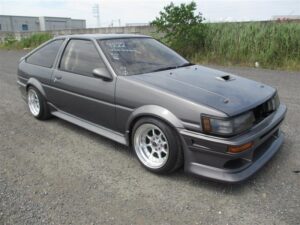 So what if you want to buy one? Well the first step is to decide what does it for you, Levin or Trueno, and 2door or 3door. 3doors which are the hatch or coupe shape depending on what you want to call them are more expensive to buy and are harder to source these days so they are often seen as the more desirable of the 2 body shapes. By contrast the 2door can offer a little more bang for your buck. But whatever you decide on the key thing to look for is rust, engines, gearboxes and interiors are relatively inexpensive so always try to get as good a shell as possible for your budget as from my experience project cars almost always end up costing considerably more than buying a good one in the first place. Where do they rust? Being a 1980’s Toyota the answer is pretty much everywhere, but pay particular attention to the rear arches, floor, sills and underside. Popular mods include changing the standard injection system for carbs or throttle bodies and engine swaps, the 20v version of the 4AG from later Corollas is a common upgrade, but anymore power than this and I think some of the magic of the AE86 is lost, part of this cars appeal has to be a screaming N/A engine.

But no matter which one you buy, be it a fully restored shed queen or a rough and ready track toy they all have that Pitbull spirit and when unleashed will be guaranteed to put a smile on your face in a way that very few other cars can.